Editorial Eye 64
John L. Walters , the editor
There’s nothing like working on a quarterly magazine for giving one an acute sense of…
In praise of Day-Glo
Letter to the editor

Letter from Richard B. Doubleday

Posterity or doom
Letter to the editor, Malcolm Frost

Social media is shifting message-making away from mass media and into the hands of multiple users.

Look beyond the confines of the Latin alphabet, urges Johannes Bergerhausen of Decodeunicode.

Whether commercial or political, the work of Theo Ballmer was underpinned by craft, precision and… 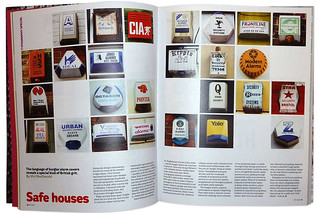 Ready for its close-up
Rachel Abrams

After 50 years as a famous face, Helvetica gets to star in its own feature film

‘From kings to cupcakes’ ‘The site is to Web design what Miyake is to textiles’

The hand-made work of Le Gun finds expression through parties, installations, a website and a big ’zine…

‘The online shrine
to crap design’

‘The NYT scores in storytelling charisma’

‘So incredible that it almost brings me to tears’

For ten days in March, the billboards of Hobart were given over to the voices of its inhabitants